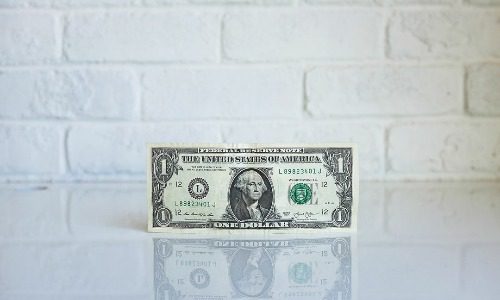 In 2011 we were sitting in the lobby of a bank, applying for a home equity loan. We had two bathrooms leaking into our basement and didn’t have the money to fix them. At 30 years old, it felt like we were doing everything right. We spent money on college, a wedding, and buying a home. It didn’t feel normal, though. We kept saying we’d save more next year or pay off the debt. Years went by, and that never happened. Suddenly, my 20s were gone, and we were nearly $200,000 in debt. At that moment, in the bank lobby, we decided to turn around our finances. At the time, we set a crazy goal of becoming a millionaire at 40. This is our story.

Becoming a Millionaire at 40

Our early 30s were all about going all in to pay down our non-mortgage debt. For us, this mainly consisted of student loan debt. Of the nearly $200,000 in debt, around $100,000 was mortgage debt; the rest were student loans, car payments, and other smaller debts (credit cards, cell phones, etc.). This period also coincided with an increase in our family income.

We lived off my income for those first few years and used my wife’s teaching salary to pay off our other debt. Then, after about two years, we did something we probably shouldn’t have. We were refinancing our mortgage to get a better interest rate. At that time, we had about $33,000 in non-mortgage debt remaining.

We decided to lump everything together and technically became debt free besides the mortgage, but our total mortgage went from about $90,000 to $123,000. Moving non-collateralized debt (such as student loans) into a mortgage is generally not advisable. If you default on your student loans, the only real impact is a hit to your credit, but if you default on your mortgage, the bank can reclaim your home. Nevertheless, as we approached our mid-30s, we had made a lot of headway in paying down debt and increasing our income.

As we headed into my mid-30s, we were financially in a much better position. With debt decreasing and income increasing, we went from being buried in debt to having space to start saving and investing. Now our attention turned to our next moves, which consisted of three potential options:

We put money into a brokerage account (index funds) for two or three years to either invest in real estate or pay down our mortgage. The problem was we didn’t do either. Instead, we found reasons to spend the money. Not all of it was frivolous spending. For example, we spent some money upgrading our home. If there were two things we did right in my 20s, the first was continuously investing in my 401k at work (about 10% + 7% company match), and the second was buying a reasonably priced home.

The house we live in is my grandparents’ old house. When my grandma passed away in 2008, we bought the house from my parents. We purchased what was around a $125,000 home for $100,000. The problem was that the house still looked like it did when it was built in 1968. So shortly after moving in, we had to replace the roof and HVAC system. Over the past ten years, we’ve updated every room in the house, including two complete bathroom remodels, a kitchen remodel, and a full basement upgrade.

We are still in the same house 13 years after moving in. It took us until last year for the place to be fully updated. So some of that money we spent in our mid-30s was worth it.

By 2016, about five years after sitting in that bank lobby broke and needing a loan, we decided to take the plunge to go all in to pay off our mortgage. I’ll admit that one of the reasons was that stocks were at all-time highs in 2016. As we know, stocks have continued to skyrocket since then. However, I also liked having a good portion of our net worth in real estate. Once we had children, going down the active real estate investing route lost its appeal. I wanted to spend my evenings and weekends with my family and not renovate properties and manage tenants.

So from 2016 to 2018, we went all-in to pay off our mortgage. Our mortgage was about $90,000 at the time. We pulled $30,000 from our brokerage and paid $2,000 extra monthly for the next two years. Finally, our mortgage was paid off in August 2018, coinciding with my wife receiving her final paycheck as a teacher. Lower monthly expenses allowed her to step away from teaching for a few years to stay home with our two children.

At the age of 37 (my wife was 34), we were completely debt-free, including our mortgage, had two children under the age of 5, and had moved to a single income. The loss of income from my wife’s teaching salary was quickly offset by not having to pay for childcare and the promotion that I received at work. Immediately after our mortgage was paid, we turned to the two most significant upgrades to our home that had not yet been completed—the kitchen and basement.

In 2018 and 2019, we spent about $50,000 upgrading our kitchen and basement. These were both massive projects that we primarily hired out for. After years of living in an ugly house, it’s so nice to have it upgraded. No longer are we embarrassed to have friends and family over. Not that we cared much, but our kitchen was hideous for about ten years. This is just one example of a “sacrifice” we made to set our financial foundation.

After paying the mortgage, we fully maxed out all tax-advantaged retirement accounts. Before paying off our mortgage, I invested between 6 and 10% in my work 401k (plus a 7% company match). My wife, when working, was non-voluntarily putting a significant amount of her paycheck into her retirement plan (about 19%). After paying off the mortgage, I now max out my 401k at work ($19,500), we each max out an IRA ($12,000), and I max out a Health Savings Account (HSA) at work ($7,200). Over the past three years, these investments and market increases have allowed our net worth to nearly double since we paid off our mortgage in 2018.

Besides that, we mostly enjoy spending extra money on our family. We recently took many weekend trips to our condo at the lake and extended trips to Gulf Shores, AL, and Disney. In a strange turn of events, being debt-free and in a strong financial position has allowed me to be a better employee at work.

When you know you have a financial runway, I’m less driven by fear at work and more focused on doing what I think is right, even if that sometimes goes against the grain. Most importantly, this phase of our life is mostly about maximizing time with my kids. They are now 8 and 4, and I know these days don’t last forever. Not having to worry about money, not being as stressed at my job, and having my wife home with the kids has allowed us both to capitalize on this brief window with them.

After turning 40 in October 2021, I’ve been reflecting on how far we’ve come since I turned 30 and where we want to go. Our 30s were all about setting our financial foundation. Even though our net worth has crossed the million-dollar mark, most of our assets are in home equity, retirement accounts, and pensions. We have achieved coast financial independence (CoastFI), which means that if we never invest another dollar in retirement accounts, we can still retire comfortably. In addition, we have about a year’s worth of living expenses in a brokerage account to manage a short-term job loss or transition.

The focus now goes into developing passive income streams while still maxing out our tax-advantaged retirement accounts. The focus will generally be on buying index funds that produce dividends. I’ve also started to make a little money from this blog. I want to continue to try to grow this blog to reach more people and make some money on the side. Maybe at some point, I’ll give real estate investing another try, but for now, I’m going to start investing in real estate-based index funds through Vanguard.

We are also starting to look for a new house. Yes, we will probably go back into mortgage debt and spend time becoming mortgage-free again. We plan to start more aggressively looking in the spring. Who knows what the real estate market will look like in 6 months. With our youngest going into kindergarten in September 2023, my wife will be looking to get back into the workforce as a teacher. Where she ends up teaching will determine where we end up (and it’s possible we don’t move at all).

Ultimately the goal for the next decade is to raise children that grow up to be good people. It’s scary to think that when I turn 50, I’ll have a 17-year-old senior in high school and a 13-year-old 8th grader. I will soak up these years while our kids are still young. We spend lots of money on family vacations, road trips, and other family outings.

Our Journey to Becoming a Millionaire By 40

There are many reasons for turning our financial story around. It’s a mix of hard work and some luck. How did we do it? It can be summarized below:

Our story may not seem impressive to you in the age of crypto millionaires. But it is incredible to us, and that’s what’s most important. Sitting in that bank lobby at age 30, we set a seemingly unachievable goal to become millionaires, and we did it a few days after my 40th birthday. It makes me wonder what would have happened if we had set a goal of $5 million. 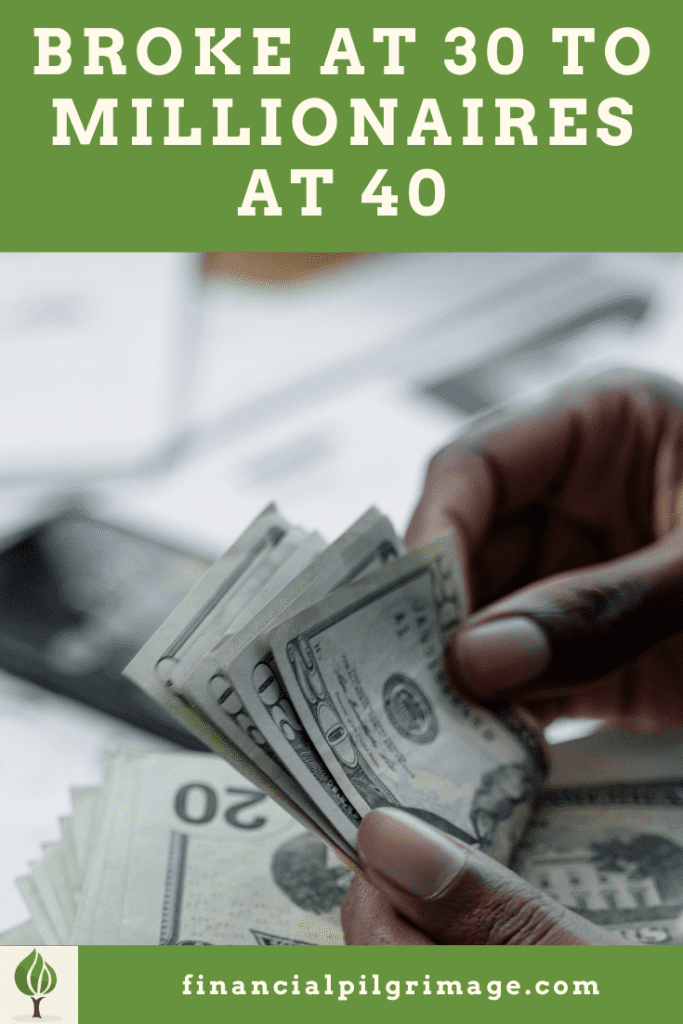