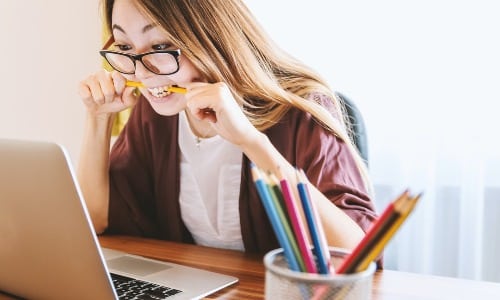 Student loan forgiveness is one of the more popular political topics in our current environment. It was announced in April 2022 that student loan payments would remain on hold until August 2022. The announcement sparked additional discussion about forgiving federal student loans altogether.

On the surface, student loan forgiveness sounds like a good idea. Unfortunately, many millennials and gen-z are held back by the weight of student loans. For example, large student loan payments can keep a family from buying a home instead of renting, taking a nice vacation, etc.

I know there is a case where student loans can provide significant benefits at the micro-level to specific families. However, it would be a disservice not to explore the impact of student loan forgiveness at the macro-level.

The longer-term macro impacts will also impact families that benefit from student loan forgiveness at the micro-level. For example, it might help in the short term to never have to worry about paying your $400 per month student loan payment, but what good is it if you have to pay $400 more in rent or a mortgage in a few years because of inflationary pressures?

I understand this post will not be popular with many people. The easy thing to say is to wipe out student loans and free people from the burden of their payments. Please know that I understand the difference this could make in many people’s lives. However, with anything like this, there are second and third-level impacts. This post will explore the downstream effects of student loans and the alternatives to student loan forgiveness that may be better in the long run.

Student loan forgiveness releases borrowers from their obligation to repay part or all of their federal student loan debt.

Student loan debt makes up the second-largest amount of debt in the United States, behind mortgage debt. As of 2021, student loan debt totaled $1.75 trillion, increasing nearly six times faster than the nation’s economy.  There is no sign of a slowdown in sight. Total student loan debt has more than doubled since 2008

A college education is still the best way to a middle to upper-middle-class life. Colleges know this as well, which is why tuition increases every year. Colleges are also competing with other schools around the country, resulting in more money spent on new buildings and athletic facilities to keep up.

Does Student Loan Forgiveness Help Those Really in Need?

If student loan forgiveness were to happen, this begs the question of who would benefit the most?  The answer is those in the upper half of the income distribution and those with graduate degrees. The lowest-income 40 percent of households hold just under 20 percent of outstanding student loan debt and only make 10 percent of the payments.

I question if those in the upper half of the income distribution need this kind of relief. Millions of Americans live in poverty, most of whom do not have any student loan debt. Wouldn’t it be better to focus our tax dollars on helping those people? The college graduate with a good corporate job isn’t going to have nearly the same benefit from a $300 monthly reduction in payments as providing $300 to a family that can’t even put food on the table.

Do the Short-term Benefits Exceed the Long-term Consequences?

Eliminating a $300 per month student payment would provide temporary relief to millions of Americans. However, what if, in turn, resulted in even higher inflation in an already overheating economy?

When inflation goes up, so do interest rates. For example, a one percent increase in mortgage rates on a $300,000 mortgage would increase the monthly payment by nearly $200 per month. So while student loan forgiveness does not directly lead to higher inflation and interest rates, it could contribute.

Student Loan Forgiveness Does Not Fix the Underlying Problem

Let’s pretend for a minute that all federal student loans are forgiven.

Do we go right back to issuing student loans to new borrowers?

The root of the issue is that college has become unaffordable for many families. Yet, an 18-year-old can sign up for tens of thousands in student loans without knowing what they are doing. Student loans are an issue for many individuals and families. However, the more significant problem is how tuition has grown over the past two decades.

The bottom line is that reform is needed in the student loan program and college education in general, and canceling student loans doesn’t do much to fix these issues. If anything, it potentially worsens for the next generation of borrowers.

The Economy is Already Overheating

Inflation is currently at the highest level in decades, the job market is at an almost unhealthy low unemployment rate, and the housing market has been out of control over the past 18 months. Additionally, the federal government is already trillions of dollars in debt, with the federal debt increasing significantly with recent stimulus in response to the pandemic.

The Alternatives to Student Loan Forgiveness

Even though I don’t believe that waving the magic wand and forgiving federal student loans is the best approach, I do think that reform is needed. Both with colleges and the continually increasing rises in tuition, and to help those struggling with student loan debt. Below are a few places to focus on instead of broad student loan forgiveness.

The good news is that there has been political pressure to improve these programs. For example, the FUTURE act will improve data sharing between the IRS and Federal Student Aid (FSA) programs. Additionally, the Department of Education recently announced actions to fix longstanding failures in student loan programs. These are all steps in the right direction.

Allow Student Loans to Be Discharged in Bankruptcy

Federal student loans are easy to get partially because they cannot be forgiven in bankruptcy. Not discharging student loans in bankruptcy means that lenders are willing to give out more money at a lower interest rate as there is a higher likelihood that borrowers will pay back the loan.

At the same time, allowing student loans to be discharged would force lenders to consider how they are lending money more carefully. But, again, this is a tough one because many high-risk borrowers who are not qualified at the time go on to get college degrees and can pay back student loans.

Without access to that money, they may never have been able to go to college. However, loaning that money is a disservice for some because they don’t know what they’re getting into and are burdened with debt they may never be able to pay back.

Regardless, if we are serious about helping to fix the student loan crisis, allowing student loans to be discharged in bankruptcy should be an option on the table.

Forgiveness for the Low Income Population or Public Service

If we’re going to go the route of student loan forgiveness, let’s consider doing it for the small percentage of loan holders in the most need of assistance. As noted earlier, most student loan borrowers are degree holders in the country’s top half of income earners. Yet, only 20 percent of loans and 10 percent of payments are made by individuals in the lowest 40 percent of households.

Could someone much more intelligent than I come up with a process to forgive loans for those under a certain income threshold or those who never end up with a college degree? I know this is easier said than done, but there has to be a solution to help people most in need. Even though there are income-based repayment plans for many lower-income earners already, allowing forgiveness would remove a huge burden from their lives.

There are also programs out there to forgive student loans for public service after several years. Let’s explore options to reduce the bureaucracy and expand the program to other professions. If someone spends ten years using their degree providing public service, they should be eligible for student loan forgiveness.

Summary: Why Student Loan Forgiveness is a Bad Idea

With anything in life, there are tradeoffs. There are undoubtedly short-term benefits to student loan forgiveness for everyone. Less money paid to student loans allows more money to be spent on new homes, cars, vacations, etc. These things are all good for the economy. They create jobs, enable families to move into nicer homes, and more.

The two overarching questions asked in this post are 1) are we helping the right people? 2) with the economy already on the verge of overheating, is this the right time to consider student loan forgiveness?

I’d argue that the answer to both of these questions is no.

There are tens of millions of people living in poverty in the United States. People who struggle to put food on the table or afford necessities. The majority of these people are not student loan holders. I know it feels like we have a blank checkbook within the federal government, but tradeoffs still need to be considered. Student loan forgiveness doesn’t seem like it should be a top priority.

Additionally, the economy is raging right now. Inflation is at the highest in decades, the unemployment rate is at an almost unhealthy low level, and housing prices are out of control. So why throw gasoline onto the fire? Even though student loan payments have been delayed for a couple of years, knowing that borrowers will never have to pay their loans back will stimulate the economy even more when the economy doesn’t need to be stimulated. Eliminating student loans also change a borrower’s debt to income ratio, and many would be eligible to qualify for additional loans.

Again, what good is allowing a few hundred dollars of student loan debt to be forgiven if it results in even higher inflation that increases the cost of goods in all other areas?

With that being said, there are pockets where student loan forgiveness makes sense. For example, forgiveness makes sense when individuals have several years of public service, have been paying into income-based repayment plans, or are in the low-income population. But, first, let’s focus on these areas before waving the magic wand and forgiving federal student loans for everyone. The consequences of doing this could far exceed the potential benefits. 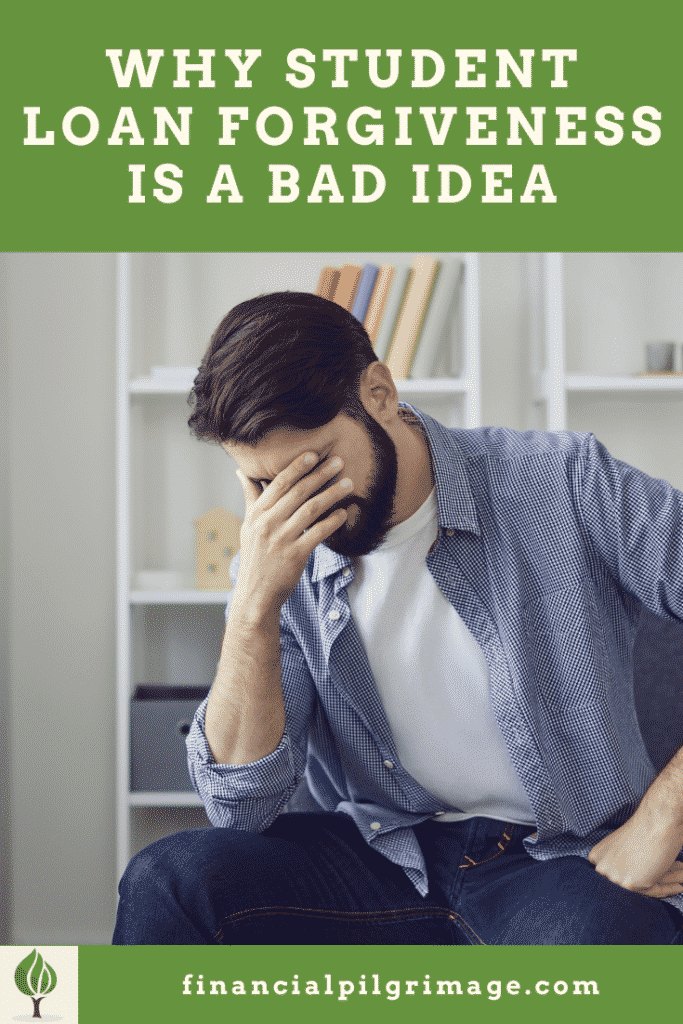