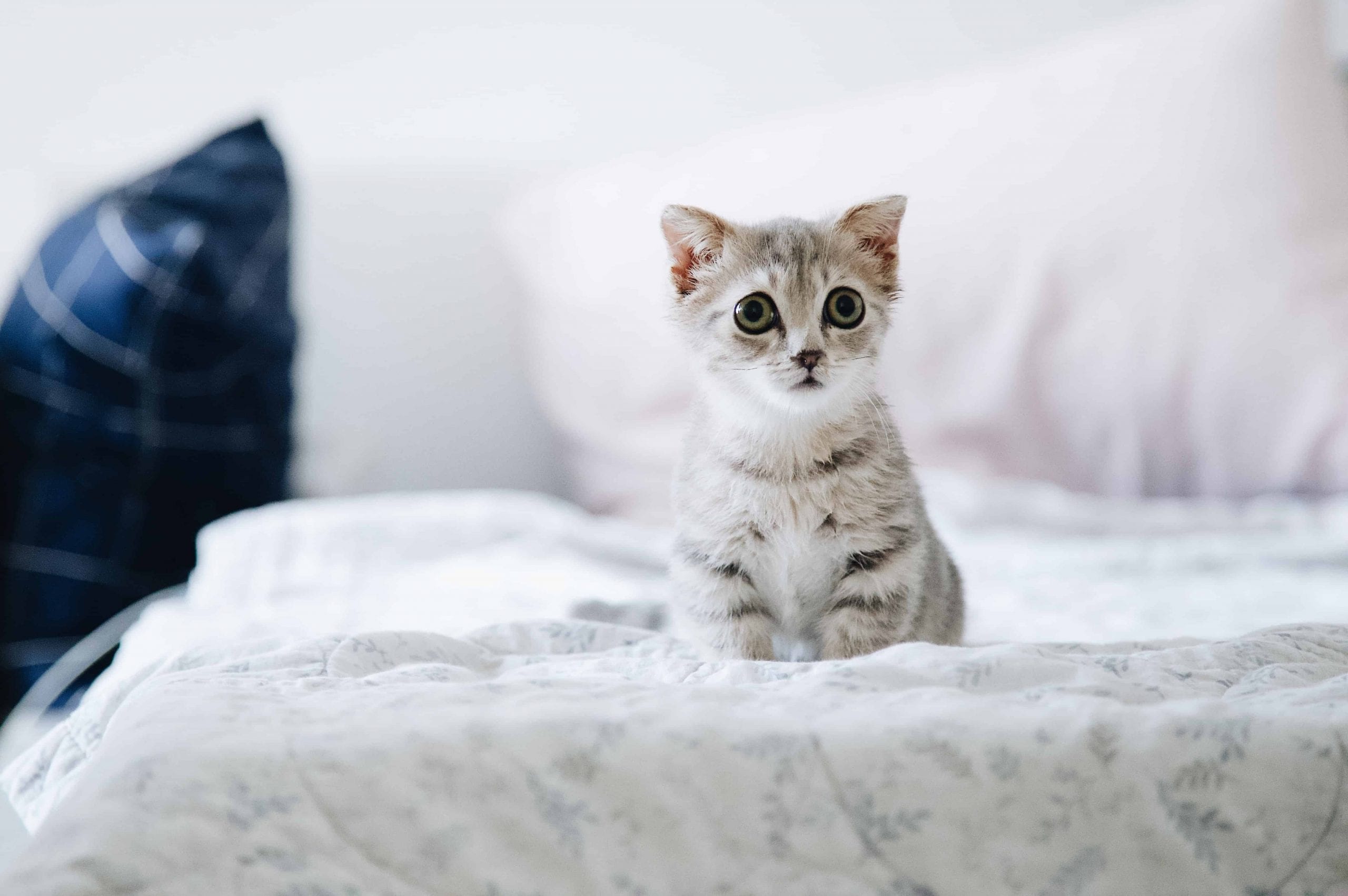 A few weeks ago I went to pick up my four-year-old from preschool. During the pickup, I was making conversation with one of the other parents.

I’m not sure exactly what we were talking about but somehow we got on the topic of animals. My four-year-old was off in the distance lagging behind. I didn’t realize he was even listening.

“We don’t have a dog but we do have two cats,” I said in reply to a related question.

Like a bat out of hell, my four-year-old storms into the conversation and proudly corrects me to say, “DAD, WE HAVE 5 CATS. F-I-V-E. 5 CATS!” He then proceeded to hold his hand out gesturing the number five and named them all to prove his point.

This wasn’t the first time he’s done this. Technically, he’s right, but I still can’t bring myself to admit that we kind of do have five cats even if only two live inside with us.

Seriously, How Do You End Up With 5 Cats?

Almost six years ago, I was working from home and looked out our backyard window to see four small kittens under our bush. Knowing that my wife is a cat lover, I really contemplated whether I should tell her about them or not. Of course, I eventually ended up saying something. We went outside to explore and they ended up running away.

Two days later there they were again.

For days they kept showing up. I’m not sure how they got in our yard. They couldn’t have been old enough to jump the fence. So we started putting out some food to see if they’d come to us. They were really afraid at first, but one brave kitten eventually took the bait.

We named the brave one Heisenberg since we just finished watching Breaking Bad.

Heisenberg was grey. There was also one black and two white kittens. As soon as the others were named I knew we were in trouble. We explored many different options to find the kittens a home including Facebook, Craigslist, and friends. We probably had ten people say they would take one of the kittens at some point.

None ended up working out.

The kittens kept coming around (probably because we kept feeding them). I really wasn’t having it and was ready to box them up and take them to a shelter. My wife is the true cat lover in the family and she, let’s say, disagreed with this approach.

At the same time, our 80-year-old neighbor who lived by herself after her husband passed away, was all about these cats as well. She would put milk out every day for them. Whenever I saw her, she would talk about how much she loved these damn cats.

Several months went by and all the people who said they wanted one of the kittens never panned out. In the meantime, these were no longer kittens. They quickly transformed into full blown cats. Taking the cats to the Humane Society would likely mean death at this point. The no-kill shelters in our area were full at the time.

The Legend of Mr. Princess

Okay, well if these cats were going to be hanging around, we at least needed to get them fixed. I found a place that would fix them for really cheap. Four cats was bad enough, but if they started multiplying it would be really bad.

One of the white cats seemed to be especially plump. At one time I swear I could feel kittens moving around in its stomach. I remember googling, “When can a cat get pregnant,” and the answer appeared to be within their age range.

We named this one Princess since it was especially dainty.

We took the cats in shifts to get fixed. Princess was up first due to the pregnancy risk. When I dropped off Princess, I mentioned my concern. The person at the clinic just kind of looked at me like I was crazy. I said, “Hey, I googled this and it says cats can get pregnant at four months.”

A day or two went by and I anxiously went up to pick up Princess. Upon pick up I asked if the cat was pregnant. “No, sir, Princess is not pregnant. And oh by the way, you may want to change the name to Prince since it’s a male cat.” 🤦‍♂️

Short, of course, for Mr. Princess.

After a year went by, Heisenberg started going missing for a few days at a time. He would always come back. Until he didn’t anymore. He was the adventurous one, so hopefully he ended up with a nice family. I don’t want to consider the alternative. Even years later we still think every grey cat within a few miles of our house must be him.

We always said, if any of our neighbors complained we would try to find the cats homes again. Only one has. It was an older couple from across the street. I said give us a month and we would do our best to get them a home.

The next day animal control showed up at our door. We lied and said they were just some random cats that kept coming around and we didn’t feed them or allow them in our house.

Screw them for not at least giving us some time to find owners.

All of the other neighbors don’t seem to mind. The lady next door has since moved out. In fact, several new families have moved in since then. Every time someone does I give them a heads up about the cats and let them know if they have any concerns to come talk to us.

So, here we are almost six years later and three of the four cats still come around. Add that to our two indoor cats and we have a total of five cats.

See Related: We Paid Off the Mortgage: Our Debt Free Journey

They show up for breakfast and dinner and otherwise are usually out exploring or doing whatever stray cats do. We let them sleep in our garage during the winter and occasionally in the basement when it’s really cold. We even have this mini heated cat house thing in our backyard.

They come in the house and hang out on occasion. All three are very friendly now and our 4-year-old loves them. The baby is kind of mean to them when she can catch them. She can’t really seem to tell the difference between real cats and her stuffed animals. She used to pull on their fur all the time but is getting better about being more gentle.

Whenever someone asks how many cats we have, I still say two (the number of our inside cats). My four-year-old continues to correct me to say that we have five cats. But really, anyone who has five cats must be crazy so I’ll stick with saying two.

I probably wouldn’t be happy if my neighbor all of the sudden had four kittens roaming the neighborhood, but what can I say? It is what it is.

Please hold your judgements as I know how ridiculous this is as well. I guess you just kind of had to be there.

So How Did These 5 Cats Help Us Become Mortgage Free?

At the beginning of 2016, we had the itch to move to a new home. The driver in our search was to get closer to the school where my wife was teaching. We met with a real estate agent who showed us a few homes in the neighborhood where we had interest. After going to see a dozen or so homes, we found one that we really liked.

It was a two story, three bedroom, two bathroom house. About 2,000 square feet not including the basement. The location and neighborhood were perfect.

We told the real estate agent that we needed a day to think about it.

My wife and I were seriously considering putting in an offer. We had a 20 percent down payment and good credit, so I’m confident our offer would have been accepted if we moved quickly. The house we were looking at was priced about $75,000 more than our current house is worth.

Then the question came up. What would we do with the cats?

It’s one thing to feed a few kittens that show up in your neighborhood and have to explain the situation to new people who move in. It’s another thing to show up in a new neighborhood with three outdoor cats and expect everyone to be cool with it.

Keeping them inside could have been an option, but they all have claws and would go crazy being inside all day. They are fine inside on occasion but they go stir crazy if they’re inside too long and start clawing at things.

If we really wanted to or needed to move we’d figure out a solution. However, what these cats made us realize is that it wasn’t worth uprooting our lives or theirs to move to a new home.

We decided not to make an offer and let the real estate agent know we were putting the home search on pause. It was shortly thereafter we made a decision to go all in to pay off the mortgage on our current home. We decided that we would stay in our current home for at least the next five years and became laser focused on becoming completely debt free.

The Important Things in Life

To me, this exercise wasn’t even about the cats. I don’t even like them all that much (except for Mr. P who is my fav). However, it did help the both of us realize the important things in life. Family, friends, health, faith, flexibility, and many other things were much higher on the priority list compared to having a new house. In fact, this made us realize how much we liked the house we were currently living in. Sometimes it takes a near impulse purchase to make you appreciate what you have.

I know this post doesn’t really help most of you, but it was an excuse to confess the fact that we have an army of cats inside and outside of our house. Writing this was somewhat therapeutic to come clean, so thanks for bearing with me if you’re still reading.

The too long, didn’t read, summary is our five cats kept us from buying a more expensive house, we learned to appreciate what we have, and shortly thereafter we made a decision to go all in to pay off our mortgage. I do need to point out that those lazy cats didn’t contribute one single dollar to help pay off our mortgage (jerks). 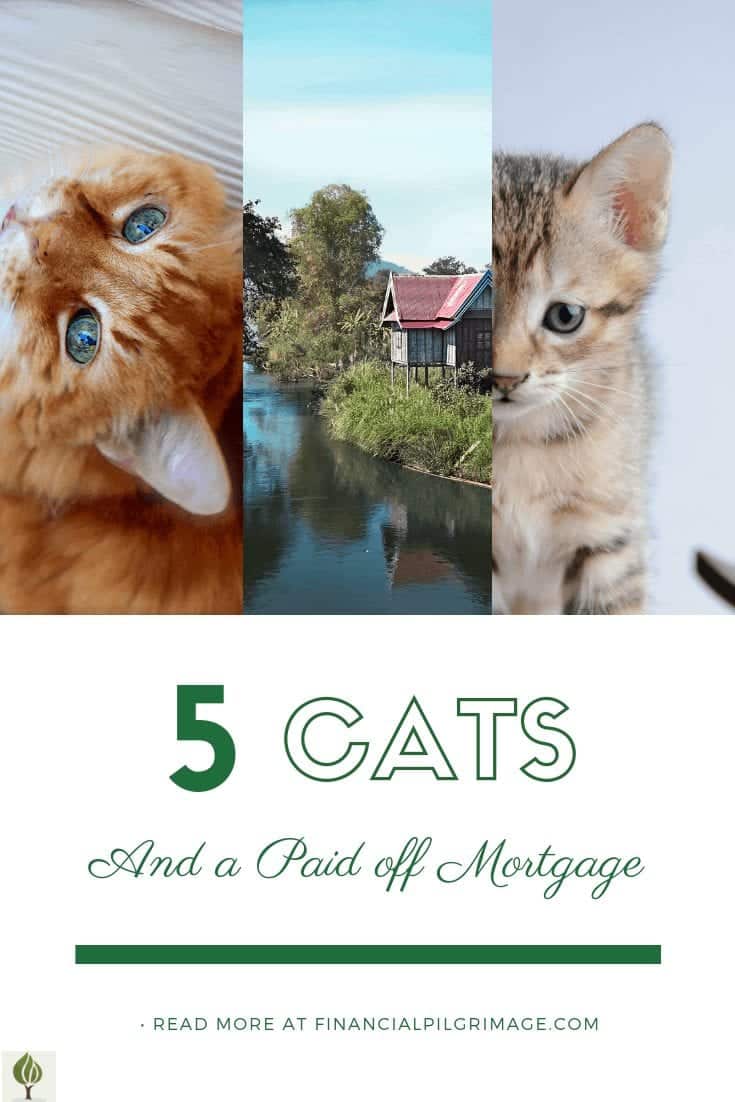