Earlier this year we were blessed with the most perfect baby girl. Having spent many hours just staring at her has me thinking about what life may be like for her and her older brother when they grow up. I’m sure my thoughts are similar to most new parents.

Will they be more like their mom or me?

Are they going to hate me when they are a teenager?

How do I keep them on the right path in life?

And maybe the most important question, how do we leave a legacy for my kids and future generations?

Leave a Legacy for Your Young Family

To leave a legacy can mean different things to different people. For some of us it means raising happy, healthy, faithful, and successful children. For others it could mean making a lasting impact on an organization or cause. Regardless of our family situation, I believe we all have a desire deep down to leave our footprint in this world and make it a little better place after we’re gone.

I can’t help to think how lucky my children are to grow up in a family where we hopefully won’t have to struggle with money. At the same time, I question where the line should be drawn so they have to learn some money lessons the hard way. Nobody wants to raise little spoiled brats. The goal will be to instill strong financial principles they can carry over into adulthood.

I grew up in a middle class family. The primary reason we were able to live in a nice house and go to good schools is because of my grandparents. Without assistance from my grandparents it would have been tough to scrape by with our family of five. My mom stayed at home most of my childhood and my dad was a manager at a fast food restaurant. We didn’t get everything we wanted, but I also don’t remember ever feeling like we were poor. Once my mom graduated from college and started working full-time we were much better off.

We grew up in a newer neighborhood with a lot of other kids around. As we grew older, my (parents) house was the one everyone came to after school and during summer days. When we weren’t outside riding bikes or playing sports, we were inside playing sports games on the computer or Nintendo. We had fun and I still have life-long friends that I keep in contact with from the old neighborhood.

The Legacy Left By My Grandparents

My grandparents were immigrants who moved to the United States in their 30s. They came here from Austria in the 1950s after previously leaving Romania to escape the war (WWII). My grandfather came first, then my grandmother several years later.

You always hear the stories of people who moved to the United States without a dime to their name and only the clothes on their back. Well this really was the story of my grandparents. Lost on the voyage were the few bags they packed. All they had were the clothes they were wearing and a few pictures.

My grandfather was a carpenter who primarily made cabinets. My grandmother was a factory worker who helped produce fluorescent light bulbs. They worked perfectly average middle class jobs. They worked hard and saved even harder. Neither spoke English until several years after being in the states. In fact my mom who now can barely speak any German at all didn’t speak English until she was almost five years old. Even though my grandfather passed when I was only 10 years old, I still have vivid memories with my grandfather including playing chess, working in his workshop, and watching football.

After only a few years living in the US my grandparents were able to save enough money to buy a house with cash. Any extra money they put into stocks. The dividends from those stocks years later were used to pay to send my brothers and me to private school.

This was of course in a different time period where middle class jobs were more plentiful and paid a decent wage even without a degree. Regardless, the older I get the more I appreciate their story and accomplishments. I can’t imagine moving to a new country with nothing and having to build a life from scratch.

Running from the War

Right before my grandmother passed away, my wife and I talked with her in the hospital for several hours. While we saw her all the time, we never talked about life before America. During this discussion she talked about her journey from Romania, to Austria, to the United States. Some of the stories we had heard before, others we had not.

She spoke in detail about the day when a bus she was on was under gun fire. While she escaped unharmed, her Aunt next to her took a bullet to the head and didn’t make it. She shared many other stories. Some nearly as tragic; others remarkable stories of the “old country”. I will remember these stories for the rest of my life. My only regret is not having a tape recorder.

As my grandmother got older she would say it was her body breaking down, not her mind. The details she was able to share from 50+ years ago were incredible.

What has changed in the last 50 years? Stagnant wages and reduction in middle class jobs to start. However, even more so is the immense peer pressure to keep up with our friends and family combined with the constant barrage of advertisements from all angles. It’s more difficult than ever to resist the social pressures to spend more money on things we think will make us happy but never really do.

One example can be seen in homes that are 50+ years old. Closets were smaller and so were bedrooms. People didn’t need as much stuff and siblings often times had to share space. Just taking a walk through the average older house and comparing it to newer homes shows how lifestyle inflation has evolved over the past several decades. Effective marketing and peer pressure has slowly resulted into us believing that previous wants are now needs.

With all that being said, the formula for success in personal finance hasn’t changed much. Live below your means, save more than you spend, reduce or eliminate debt, and invest the difference. Personal finance is a slow game that requires a lot of discipline. It is the easiest, hardest thing to do right. The concepts are easy, the doing is hard.

As I sit here with my new born baby girl laying next to me, I am inspired more than ever to leave a legacy for my family. I would not be the same person today if my grandparents weren’t driven in their pursuit of prosperity. I owe it to my family to do the same.

The pursuit of financial independence is about options and freedom. It’s about having control of your financial situation. There may be nothing more important than to leave a legacy for future generations. We are only here on this planet for a short period of time. It’s up to us all to try to leave it a little better place. I hope to build on the legacy of my grandparents and provide the same opportunities for my family and other charitable causes that I believe in.

How do you plan to leave a legacy?

[jetpack_subscription_form title=”” subscribe_button=”Sign Me Up” show_subscribers_total=”1″] 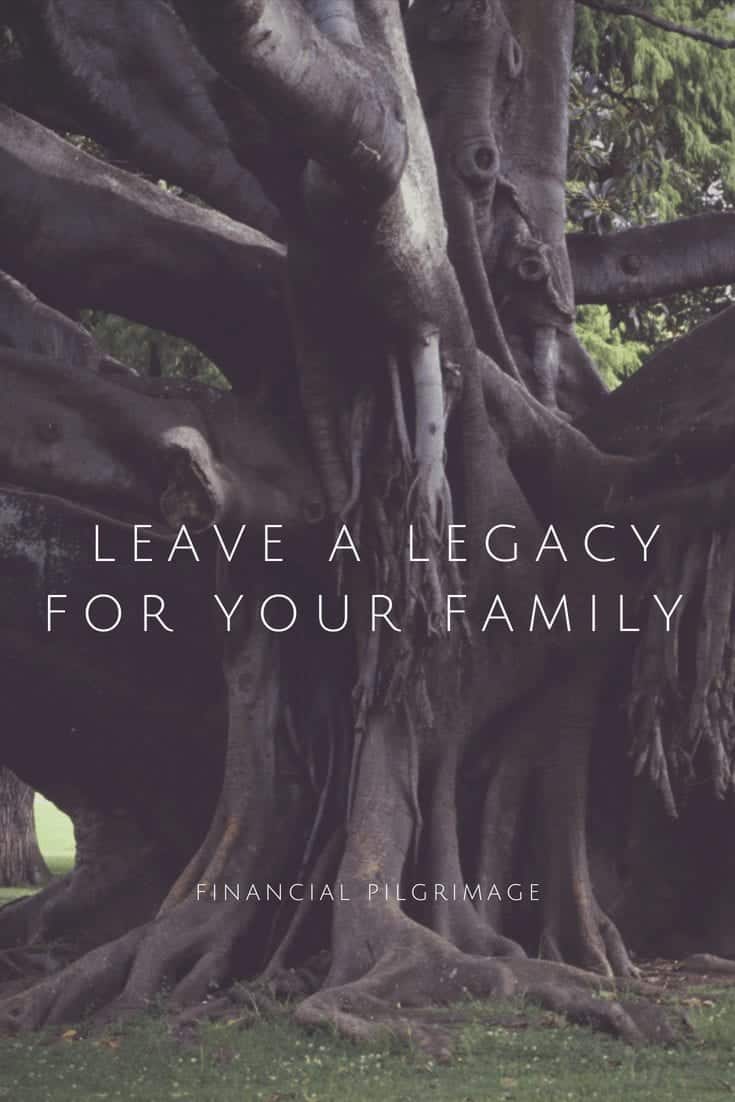