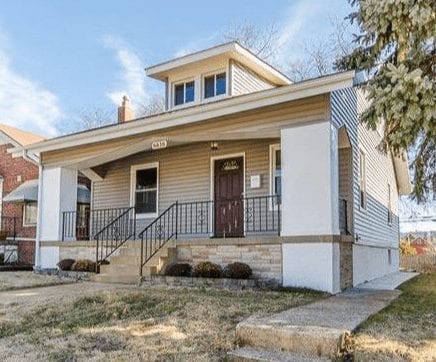 Around this time last year my wife and I sat down at a restaurant and discussed our goals for 2017. It was the first time we actually sat down and talked about our goals together. While we had discussions in past years about saving money and paying down debt, we didn’t have much focus or direction.

Paying down debt remained a priority in the beginning of 2016. However, I was easily distracted in the pursuit of other interests. For example, even though we started the year focused on paying down the mortgage the focus changed a few times and eventually we found ourselves with a rental property under contract. The plan was to use a combination of savings and home equity to make a “cash” purchase. We’d then refinance after six-to-twelve months.

The asking price of the property was $89,000 and we eventually got it under contract for $65,000. We knew the property needed some work and then the inspection report raised additional concerns. The front porch was separating from the house, there was termite damage in the basement, and siding on the outside of the house needed to be replaced. This didn’t include all of the cosmetic work needed as the house hadn’t been updated in decades. It would have been a huge undertaking for someone like me with little experience fixing up homes.

To Partner or Not to Partner

Due to my lack of experience, I was planning to partner with a contractor I had invested with in the past. A couple years prior I invested $10,000 into a flip project with this contractor. This was a significant amount of money as I still had more than $100,000 in debt and only $20,000 in total savings not including retirement. He purchased two homes using mostly his own money and a smaller percentage of money from a few small investors such as myself.

The first house was flipped and sold within 6 months for a decent profit and I was paid nearly $1,000. Not a bad return on my money for being a silent investor. The second house took almost another year to sell. We didn’t receive any additional profit though the initial investment was returned. In the end it wasn’t the best investment, but we got our money back with a small return so I was willing to give the partnership another shot, especially since he was a really good contractor.

I ended up backing out of the deal for a few reasons including not being comfortable with using equity from my personal residence, concerns that had surfaced with my potential partner, and the results of the inspection report. I knew this was probably still a good deal and I hated backing out so late, but going through the process made me realize how unfocused I was in pursuit of financial independence. I’ll admit, once I had the house under contract I started to think of all the things that could go wrong and fear set in as well.

The house was eventually purchased by a flipper who fixed up the property and resold it. According to Zillow the selling price of the home was $134,750. The pictures of the listing confirmed that a lot of work went into the house (see below). I doubt the rehab cost anywhere near $70,000, so there was likely a large profit made from the flip. Therefore, the title of this blog post is a bit misleading as the overall profit was much less than $70,000, though if I had to guess the profit was still well into five figures.

Before and After Photos of the House

This was huge missed opportunity on the surface. Though I don’t regret it (for the most part).

My wife and I have been at this debt payoff game for more than five years now. One of the reasons why it has taken so long is the lack of focus. We have always been pretty good at saving money. The problem is I have shiny object syndrome and have changed direction several times. Unexpected costs have come up for our own home such as a new roof or HVAC system. Other times we have overspent on cars, a bathroom remodel, or vacation. Once you get good at saving money, it’s really hard to stay disciplined to not make a big purchase. It takes years to build up a decent amount of savings, and only a small moment of weakness to spend it.

After backing out of the contract we made a firm decision to go all-in to pay off our mortgage. We have made great progress ever since. As of mid-2016 our mortgage was just above $100,000. At the end of 2017 we approaching the $30,000 mark. Most of the pay down was due to applying $30,000 from savings to the mortgage. It was surreal to take $30,000 that had taken years to save up and have it be gone to the mortgage in the blink of an eye.

Returning Focus to the Mortgage

Our focus remains on paying down our mortgage and once we accomplish this goal, we will move onto something different. Maybe we will take another swing at rental properties, maybe we save up money to fix up our current house, maybe we will save money and start looking for a new home in a similar price range, or maybe we will start dumping a bunch of money into retirement or index funds. Regardless, we will pick one goal and have complete focus on achieving it, whether that goal is directly related to our pursuit of financial independence or doing what is best for our family (e.g, looking for a home in a better school district).

The fear factor is a real thing as well. When we try real estate again I’m sure we’ll be scared. However, not using home equity will allow us to be more accepting of the risk. We plan to take advantage of loans next time to make a  20 percent down payment. Good deals may be tougher to come by without using cash. Taking a loan will allow us to get into the real estate game quicker without risking our current home.

Our goal going into 2018 is to become completely debt free before my 37th birthday in October, and hopefully sooner. Financial independence is still a ways away. However, I am looking forward to not owing money to anyone (at least for a while).