My friend came by and handed me a $4,800 check for placing a district manager candidate with Aldi. Should I call him friend or boss? What does a freelancer call the person that pays them for doing work? Let’s go with a business partner for the time being. Either way, I was riding the high that day as a freelance recruiter.

Business relationships with friends are usually complicated. This one was no different. While we got along well for most of our business relationship, things ended up getting weird in the end. While he always treated me fairly, he did not pay out one of his other business partners and then skipped town.

At one point, he was one of my closest friends, yet we hadn’t talked in nearly four years. We were different people but often had deep conversations about various things in life. I miss those chats as I don’t have that with too many other friends in my life. I don’t have any beef, but he left town, changed his phone number, and disappeared from social media. Even though I could probably find him if I wanted, he seemed like someone needing a fresh start in a new city, and I didn’t want to mess with that.

For two years, we worked together. He had recently left a big recruiting firm, and after his one-year non-compete expired, he started recruiting again for former clients. His operation was small but profitable. Big enough where he needed help, but not so big that he was ready to bring on full-time staff. I continued to work my 9 to 5 job and help recruit on nights and weekends. For those two years, I made about $20,000 with this side hustle.

And then I quit.

What Is a Freelance Recruiter Anyway?

Freelance recruiting is a side hustle you don’t hear much about in the personal finance community. The job of a recruiter is to fill open positions for companies. Many small-to-medium-sized companies use recruiters to fill positions when it can be challenging to find qualified candidates. Other companies would instead outsource their human resource needs.

The hardest part about being a recruiter is finding clients willing to pay you to fill positions. A strong relationship must be in place between a company and recruiting firm before they’ll be ready to pay a substantial fee to hire someone. There is typically a lot of marketing that goes into building these relationships. And like many businesses, word of mouth and reputation is the best marketing.

Finding candidates to fill those positions is also tricky, but there are a lot of tasks that can easily be outsourced—and sometimes outsourced to freelance recruiters like me. My role was to sort through resumes, identify potential candidates on sites such as LinkedIn, complete initial background screening, and sometimes conduct initial interviews. This allowed my friend who owned the business to focus on the most critical aspects of the company, such as ensuring strong relationships with existing clients and finding new clients.

How Do Recruiting Firms Make Money?

In almost all cases, recruiters are paid by the company/client. In this example, the client is Aldi, and the candidates are the individuals we are sending to Aldi to fill potential openings. As was the case with my business partner, a small recruiting firm can survive on the fees from two or three great clients.

Recruiting fees are generally based on a candidate’s starting salary. The fees can range from 15% to 35% of starting salary. Jobs that are easier to fill are typically on the lower end, with more difficult positions to fill on the higher end.

My cut of any placements as a freelance recruiter was based on how much of the work I did. For example, if I found a candidate and passed a resume on, my cut of the fee would be around 10%. However, if I screened a candidate, completed the background screening, and conducted the initial interview, my cut would be closer to 30%.

So if you run the math: a starting salary of $80,000 could result in a recruiting fee of $16,000 at a 20% commission for the recruiting firm. If I found the candidate, completed the background check, and conducted the initial interview, my cut as a freelance recruiter would have been $4,800 at a 30% commission.

While this seems like a crazy amount of money, like many commission-only jobs, a lot of work went into dozens of other candidates that never resulted in a hire. The recruiting business is not for the faint of heart. There were many times when I thought that I was getting a payout of thousands of dollars, only to have a deal fall through at the last minute. It can be tough to manage those ups and downs.

The Life of a Freelance Recruiter

I can’t speak for all freelance recruiters but can walk you through my responsibilities. For example, my business partner had several freelance recruiters working for him. He’d assign it to one of us whenever a job opening came in. That’s when I went on the hunt for qualified candidates. Typically that meant either actively recruiting through LinkedIn or more passively recruiting by making a job posting on Indeed and then screening resumes.

I would collect a slate of 5 to 10 qualified positions, conduct an initial background screening (mostly a criminal history check), and then send it to my business partner. He would do a quick review, and then one of us would contact the candidates for an initial interview. After that, we’d often request to meet the candidate in person for higher-paying positions.

After narrowing down the slate, we’d send the top candidates to our client for their first actual interview. At that point, it would be mostly out of our hands. We’d try to coach the candidate through the process, so they know what to expect. Our clients ultimately decided to hire the candidate. Our job was to place the very best candidates in front of them.

So why quit a five-figure side hustle that I could do in my free time? A few reasons.

The primary reason was I had recently been promoted to a manager position at my day job. With that, I was often interviewing candidates. While the positions I was interviewing for at work were often in a different sector than in my side gig, there were still potential conflicts of interest. The extra money was nice, but it wasn’t worth risking my primary source of income.

Second, when I broke down the number of hours I was spending, I questioned if the money was worth it, especially after paying taxes on the additional income. Most weeks, I spent 5 to 10 hours on the side recruiting. However, there were busier weeks where it would be 20 or 30 hours. Even averaging 10 hours per week, the hourly wage was far less than I was making at my day job. Working 45 hours a week at my day job and then sometimes 20 plus hours on the side hustle got old after a while.

Finally, as I mentioned, there were some shady things that I started noticing. My business partner was getting suspicious of other freelance recruiters even though there didn’t seem to be any reason. That ended up spiraling into him not paying one of our other friends before leaving town. Even though our relationship was always good, there were some red flags that I should have paid closer attention to in hindsight.

What I Learned as a Freelance Recruiter

In the end, the most significant benefit to recruiting wasn’t the money. It was the skills that I learned and applied to my day job. Scanning thousands of resumes over the years allowed me to develop the ability to do so in my role as a hiring manager. Interviewing candidates in my side gig allowed me to get over the jitters of doing so for the first time in the corporate world. And finally, freelance recruiting helped me pick up on the nuances that separate average candidates from strong ones. This is something that only comes with experience and repetition.

I’ve since been promoted three times from an entry-level manager to a senior manager. I’m not sure if there’s a direct correlation between my past recruiting experience and success in the corporate world, but I know it didn’t hurt. Hiring is one of the most important things you do as a manager. A mentor of mine once said, “if you hire well, you can be an average manager and still be very successful; if you hire poorly, you can be the best manager ever and will not be successful.”

I enjoyed my experience as a freelance recruiter. It allowed me to build new skills while making extra money on the side. I’ve often found that the best part about side hustles isn’t the money; the most significant benefit is the skills applied to other areas of life. Side hustles require a growth mindset to be willing to venture into areas where you may not be as comfortable.

Today’s main side hustle is this blog, though I make far less than when I was recruiting. But, at the same time, it’s taught me so much about digital marketing, made me a better writer, and has led to many relationships that I wouldn’t have otherwise. So if you are on the fence about starting that side hustle, just get started and worry more about the skills you’re building instead of the money you’re making right away. 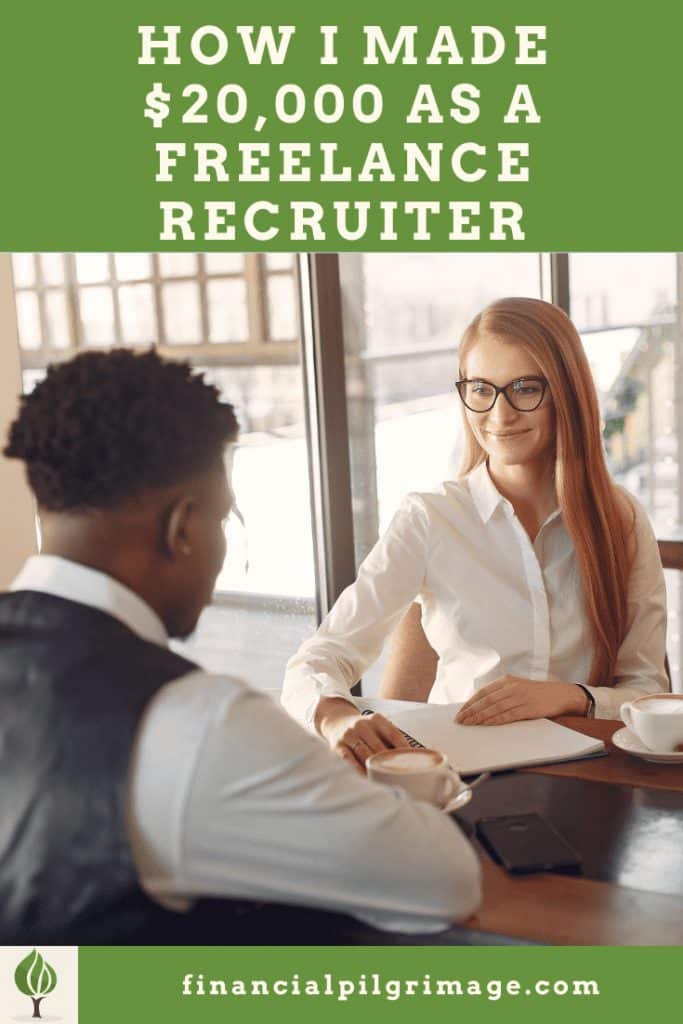