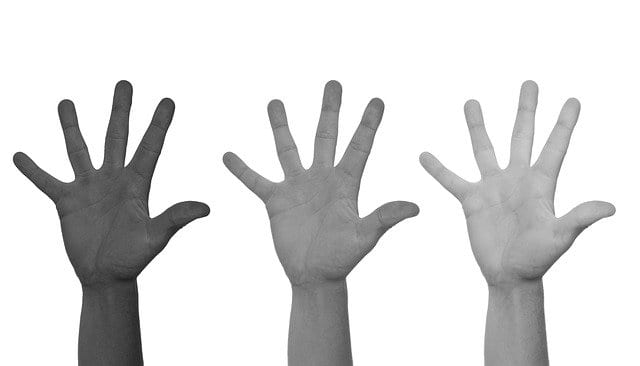 It has taken me three drafts and many re-writes to finally hit publish on this post about how our family is planning to address racism. While I know this is a personal finance blog, I hope you bear with me as I put my thoughts into the world regarding current events. Too often, people are scared to put their thoughts out there because they’re afraid of their words and intentions being miss understood. I am too, but it’s important to share even if my words aren’t perfect.

For the past several weeks’ many White folks like myself have been asking what we can do to help address the long-standing and complicated issues around race in the United States.

The answer has often been to sit back and listen and learn.

Don’t get me wrong; listening and learning are critical parts of this process. But unfortunately, too many of us live in our bubbles and are blind to the complexities of racism. Developing empathy always starts with listening and learning. However, at some point, action is needed to advance a cause.

In today’s world, all too often, it seems that taking action means sending out a few Tweets or Instagram posts and then moving on to the next hot button issue.

We can all agree that not one of us will solve these complex issues by ourselves. However, I believe for most of us that change happens at the micro-level, not the macro. It happens in our living rooms, communities, and voting booths. It occurs when a large number of people take small steps collectively.

So while I do not have all of the answers to solve these issues, below are a few things that my family and I will be doing to help make progress.

Ensure my Kids Have Exposure to People of Different Backgrounds

A few weeks ago, when racial tension was at all-time highs, I talked with my six-year-old. I intended to open the discussion around race. He goes to a diverse school with a mix of People of Color, Immigrants, Christians, Muslims, etc.

I asked him, “do you like going to a school where not everyone looks the same as you?” We haven’t had conversations directly about race (he’s 6), but we talk a lot about how important it is to love everyone regardless.

Eventually, he started talking about how he got along with everyone. In his words, “I like people with straight hair and curly hair.” Not exactly what we were going for, but the innocence of his answer gave me hope that he would grow up seeing people as people and not by the color of their skin. Maybe I’m naive.

When I think of how people can be so cruel to people with different backgrounds, I’ve concluded that it’s because they never get to know that other group of individuals.

Hate festers in spaces with a lack of proximity to people different from us. In my experience, it’s tough to dislike people from up close. But, when we get to know other people, it allows us to see their good.

This all begins with getting to know people of all backgrounds. It’s one of the reasons why we like the school district we’re in so much. There is a good mix of people from different races, religions, and other backgrounds. I want my kids to know that we should still love one another even though we may be different. That all begins with interaction with a diverse mix of people.

During the past several weeks, the organization I work for has done a great job giving the microphone to Black leaders while many of us have sat back to listen and learn. It’s been eye-opening hearing stories of the blatant racism they’ve experienced in their lives.

The fact that people in the workforce today had to go to segregated schools when younger always puts into perspective the recency of the civil rights movement. Segregation wasn’t something that happened generations ago. It happened less than 60 years ago.

As we all know, once the civil rights movement occurred, People of Color were not immediately treated as equals.

It takes diversity initiatives and sometimes even quotas to level the playing field in the workplace. It may not always be fair. But if we want to get to a place where we have real diversity in organizations, especially within leadership, we need to help those that have faced discrimination in the past play catch up.

My goal is to become more aware of my biases towards anyone with a different background than myself. For example, focusing more on diversity instead of cultural fit can sometimes be at odds. I want to help pull up the people around me that need the most help.

To be clear upfront, I do not identify with either political party. I know this bothers some people, but it’s never made sense how people can vote blindly for one political party 100% of the time. That blind loyalty has always seemed dangerous to me. So instead, I like to look at issues individually, prioritize the issues that I think are most important at that time, and then vote for the candidate that I feel will best support those issues.

When we think about voting, we often think of presidential elections. Yet, while voting for the president is essential, the elected officials that matter most in reforming police departments and the criminal justice system work at local levels.

I know that voting is a controversial topic in minority communities. Why vote when you feel the entire system is against you? And for those that want to vote, in some areas, there are policies in place that make voting a challenge. I understand all of that. Some may even think that voting is rigged and their vote doesn’t make a difference either way.

I believe that voting is the single most effective way for most of us regular citizens to make meaningful changes in society. That all starts in our backyard with local elections.

Why aren’t more people getting out there to vote in local elections? (I’m talking to myself here as well. I’ve been guilty of skipping local elections.) So my question to those who think that their vote doesn’t matter is, I would flip that question on its head and ask, “what if my vote does matter?”

Again, I know this is a complicated issue, and it’s not always as simple as “just go to vote.” At the same time, I hope that the energy from the recent protests also carries over to the voting booth later this year. Your vote may not always matter, and there may be complicated barriers to allowing a person to vote, but as American citizens, we should do everything in our power to be able to cast our vote and voice.

My commitment is to become more educated in local elections. To make sure I don’t skip local elections in the future. And vote for politicians and policies that will make meaningful changes to eliminate racism.

Get Involved With Our Church

I’ve appreciated how the church we go to has not tip-toed around racism. Instead, it’s addressed it head-on while acknowledging the shortcomings of our church.

The church we go to has two locations. The main location is about 10 miles outside the city in a suburban area, nearly all White. The second location is within the city limits and is in a more diverse area. This new location has been open for a little over a year, so most of the attendees came from the original location. Therefore, despite being in a more diverse area, nearly all attendees are White there.

Churches remain segregated across the country. While improvements have been made over the years, there’s still a lot of work. This is another situation where trying to resolve this issue on a macro level is overwhelming. However, Individually we can take steps to increase diversity in our own churches.

The first way to do that is by making People of Color feel more welcome. I was listening to a podcast recently with rich and Regular. They talked about how important it is to make Minorities feel comfortable when around a mostly White community. Of course, they were referring to the personal finance space, but the same applies in all situations. So while it sounds simple, I wonder how many People of Color have walked through the doors of our church and never come back because they didn’t feel comfortable?

The second way is to find a sister church that is predominantly Black and partner with that church. This will allow us to learn from each other. To hear directly how we can make both of our churches more diverse and break down the barriers preventing increased diversity. For me, a stretch goal will be to be involved in this effort instead of just taking a back seat and hoping it happens. I want to be involved in bringing this effort to life.

These four things above will not solve the issues with racism on their own. Some may read this and think that what we’re doing is not enough. This is a trap that many people fall into that results in us doing nothing because it feels too overwhelming. It’s important to focus on the things that we can control. Racism is a messy and complex issue with a deep history. At the same time, we vastly undervalue the impact that micro-changes can have over time.

Often what I see happening is people get really fired up about a social issue for a period of time. They make a few posts on social media (which isn’t bad) and then move on without ever making changes. It’s important to take action eventually, no matter how big or small.

I acknowledge that I can’t solve every complex social issue out there, so instead, I’m going to be realistic and try to make a few changes in my life that I think can impact. At the same time, I will continue to listen and learn and seek out other opportunities. Thanks for reading!